Bloomberg’s latest ranking of “the world’s most innovative countries,” published this Tuesday, puts Ukraine at the 53rd place, between Tunisia and India.

The Eastern European country, which was ranked 46th in last year’s ranking, is among the economies which “sank the most,” dropping out of the top 50, the Bloomberg analysts note.

Doing better than Ukraine this year in the Eastern European neighborhood are Poland (22th place), Russia (27th) and Romania (29th). Surprisingly, Estonia is ranked only 36th.

South Korea retains the first place, followed by Germany – which Bloomberg praises for its progress in the fields of research and education – and Finland.

The USA moved up to eighth place, “a year after cracks in education scores pushed it out of the top 10 for the first time.” 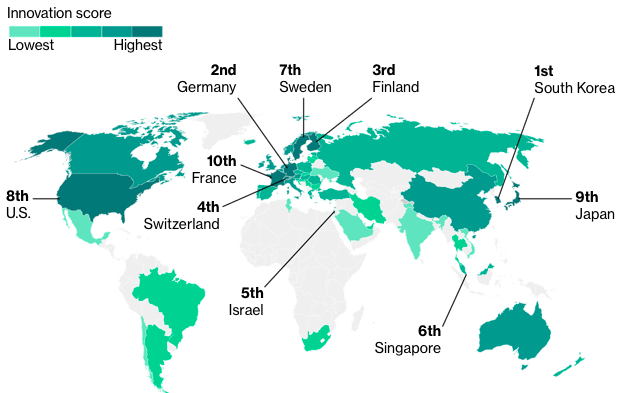 In its seventh year, the annual Bloomberg Innovation Index “analyzes dozens of criteria using seven metrics.” The criteria include R&D spending, manufacturing capability and concentration of high-tech listed companies. The data comes from the International Labour Organization, the IMF, World Bank, the OECD, the World Intellectual Property Organization, UNESCO, in addition to Bloomberg’s own data.

It is a challenge to combine and weigh such a variety of criteria, hence the results from such rankings should be considered and interpreted very cautiously. In the case of Bloomberg’s latest ranking, Estonia’s place far behind Russia and Romania might raise skepticism from experts with knowledge of the Eastern European innovation scene (see EWDN study).

Adrien Henni is the founder of International Digital News, a tech news and research agency dedicated to the emerging tech scenes of Eastern Europe and Central Asia. With nearly 20 years of experience in the high-tech and venture businesses in France and Eastern Europe, he advises a variety of startups, investors and other organizations. He is a regular contributor to industry publications and speaks at conferences in Western and Eastern Europe, Asia, and America.

Established in 2014, Ukraine Digital News (UADN.NET) is the first English language international information platform dedicated to the Ukrainian digital and IT industries. As a free resource, it provides news, market data, business analysis and updates pertaining to the Internet, e-commerce, IT services, software development, hardware and other innovation in the country as well as to related investment activity and the legal environment. UADN also conducts or participates in research activities that provide local and international audiences with in-depth analysis and quality data on these industries. UADN is published by Belgian company International Digital News.

Everything you ever wanted to know about Ukraine's digital industries
Conveniently delivered to your mailbox, every week